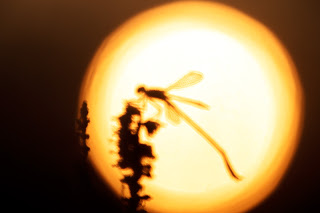 Well, not really actually. It was a rather pleasant early morning when I arrived an hour before dawn at a local fen in the middle of a large patch of flowering heather. The day before had been a very wet one and temperature during the night had dropped enough for a foggy morning. There was fog, but not enough for it to ‘explode’ when the first rays of the summer sun would hit it. So I packed the landscape kit away and reached for the macrolens, to photograph dew-covered damselflies and dragonflies. It was missing from the camera bag, which is just a more interesting way to say I had left it at home…forgotten and all alone on the table.

So I got the 70-200 instead and coupled it with an extension tube and the 2x converter. A long and wobbly combination, but enough to do the trick. I found a resting damselfly and lined the camera so that the rising sun was right behind it. The sharp shots I got just didn’t appeal to me. The intentionally blurred ones did, as they better respresent the feeling of shimmering heat that I wanted to express.

It occurred to me that this is the third anniversary of my blog. How time flies when you’re having fun. I read back on past topics and was surprised by the fact that the first entry stated that I wanted the blog to be informal and diary-like, but also educational. The idea was to explain e.g. exposure and post-processing choices. It appears to me the first three years have not been very educational. That’s about to change, starting right now.

The exposure for this shot was determined by using M mode and dialling in a -1 stop exposure. More importantly though, I (de)focussed using liveview, as looking through the viewfinder into the rising sun could do some severe damage to my eyes.