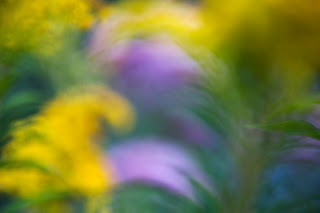 My third attempt with the foxes was even worse than the second. This time, I did not get to see anything remotely foxy. I had brought a portable hide instead of the camocloth to conceal my every movement. I guess they were just at another location for the morning. Another person told me the foxes had not been seen for at least a week and they might have been shot, but given the fresh excrement on the trails, I don’t think that’s the case.

Fortunately I had also brought the macrolens. Unfortunately, the wind was rather heavy. So much for close-ups of flowers, insects, damselflies and dragonflies.

I wanted to give up and go home when my attention was caught by a large patch of colorful flowers. The light was rather bland and the flowers were surrounded by a tick, prickly cover of nettle and blackberry (not the smartphones). Therefore I switched to the 70-200 to be able to keep some distance. I focussed manually behind the flowers in order to achieve a rather impressionistic look, the subject being a composition of colorful forms and shapes. Now I have to start thinking of a subject for next weekend.