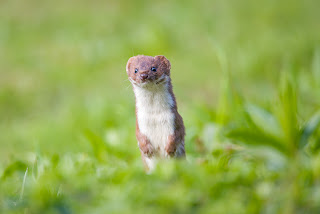 Last Friday I spent the morning in a tenthide overlooking a patch of arable land. I was invited by a friend to visit the hide he had erected on his property to photograph Ring Ouzel (Turdus torquatus; Beflijster) and Common Partridge (Perix perdix; Patrijs). The tent was put up along a beautiful hidden hedge that houses all kinds of birds. Except the already mentioned Ring Ouzel and Partridge, the spot was frequented by typical birds of extensively used farmland, such as Stonechat (Saxicola torquatus; Roodborsttapuit), Yellowhammer (Emberiza citrinella; Geelgors) and Kestrel (Falco tinnunculus; Torenvalk). All these species (some of them on the Red List) breed on the property, a testimony to the management of the area, which is no small task for the owner.

After a relatively fruitful morning in the hide in a very awkward position, I went to his house for a well-deserved cup of coffee. On the way, the owner told me he had seen a Weasel (Mustela nivalis; Wezel) hunt for sparrows in the ivy that grows on the walls of his house. He had not even finished his sentence, or I saw a Weasel rapidly jump across the trail towards the house. A nice observation!

Enjoying the coffee in the livingroom, I watched the birds outside the window and again saw the Weasel, this time clearly on the hunt and not far from my position. I rushed to the car to get the camera and when I came back, the owner urged me to hurry. The Weasel sat some 4 meters from the window in an upright position, scouting the area for his (given the size difference between males and females, it was a he) next vicitim. I took 6 frames through the double-glazed window before he rushed off again. I was surprised the images were relatively sharp, probably courtesy of the lady of the house having cleaned the windows recently. Later on, we saw the Weasel perform his high-velocity scouting of the area several times more, until he went for the safe cover of a stone wall to enjoy the vole he had just found and killed. The vole was bigger than his head! Given the fact that the Weasel is a repeating guest and they should have baby Weasels right now, we have good hopes to photograph it again, and maybe even lure it into a nice position with eggs and other goodies that a Mustelid normally cannot resist.