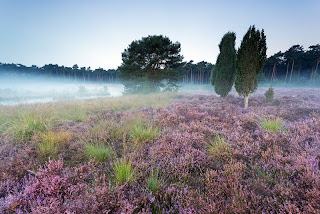 Because the weekend usually consists of way more than photography alone, I have to do some planning ahead of sorts on the Thursday. The weather forecast made me decide that Saturday would be my photography morning of choice. When I looked out of the window on Friday, I smiled at a drab and grey sky and padded myself, the weather Gods and the weatherman on the shoulders for making the right choice. When I was out in the field on Saturday, I wanted to punch myself, the weather Gods and especially the weatherman in the face for making the wrong choice.

There I was, the icon of a partly cloudy, partly sunny sunrise burning on the display of the phone in my pocket, staring in disbelief at what seemed a recycled version of yesterdays grey sky. The sunny part must have been somewhere else, stuck by the weatherman where the sun does not shine. Only after two hours did the sun manage to shortly break through the clouds, but by then the good light had long gone. Also, it being rather windy, conditions for macro photography were less than ideal. I gave up, packed the gear, and decided to combine the useful with the not-so-pleasant by hiking across the wide open plain and look for future vantage points for more variation in my portfolio of this place.

The image above is from a week ago when the conditions were a little better with a thin layer of fog, but the sky was boring to say the least. What you see is a small open area, some 1,000 meters from my usual playground. It is, also in name, the smaller sibling to my favorite hangout place and equally nice, with a special fen called a pingo (a very deep and circle like ancient fen with an island made from peat in the middle. The terrain is more undulating than its big brother’s and features some beautiful juniper trees. It is very photogenic, but I seem to struggle to get something nice. Because it is small, the wait for the sun to hit anything is longer and thus the light is harsher when it is finnally there. Also, the tree line on the horizon is thicker and more pronounced because it is closer. The photogenic fen is (obviously) the lowest point, so usually you are shooting down. I find it difficult to get an attractive perspective when shooting from a higher vantage point downwards. Something to work on during the coming months. I hope to be able to provide you with some great quotes from morning glory’s next great stories, because morning glory has been silent for a while now with not a lot of stories to tell.