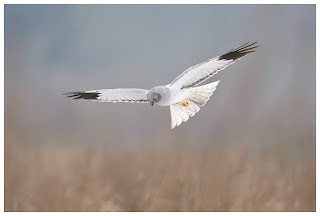 A friend of mine has his enormous ‘backyard’ turned into a private nature reserve. Last year, he decided to create two grainfields, which were not to be harvested. The idea was that the fileds would attract large numbers of mice, finches, partridges and other animals. Well. the plan worked out. This winter, lots of Greenfinches, Chaffinches and Yellowhammers and a few Reedbuntings and other birds forage there. In turn, these birds attract raptors. The local Sparrowhawk looks very happy with the ‘corn of plenty’ and shows one spectacular dive after another.

What I like even better, is that wintering Hen Harriers are attracted by the fields too. Two males and a female regularly patrol the fields in their specific slow but gracious way. Last weekend, I spent two full days in the car, which I had parked at the end of a strip of grainfield. The windows were camouflaged and all I had to do was wait for one of the birds to show up and fly right into the lens. Easier said than done…

Because there are two grainfields and I could only overlook one, the birds would be on the wrong field for 50% of the time and sometimes they just stayed too far away. All in all, I spent over 10 hours, with only few opportunities for photography. On both days, the male was most cooperative and flew right into the lens. Hopefully, next time he’ll perform his act a bit earlier on the day when the light is not that dim, but I must say I am very pleased with the first results, especially given the very high ISO rating I had to use.