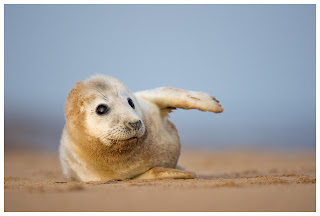 Hanneke and I spent the last few days of October in the UK with the plan of photographing Red Deer during the height of the annual rutting season. On the way back to the ferry, we would visit the seal colony at Donna Nook along the Lincolnshire coast.

We spent three days with the Red Deer. Weather was what you’d typically expect from the UK: grey. On three consecutive early mornings, the sun lost the battle against the clouds. Fortunately, we got a few minutes of nice warm sunlight at the end of the days.

Because of the relatively high temperatures, the rutting season was not as frenetic as you’d expect (and hope). So not a lot of roaring, fighting and mating going on, but enough for a very enjoyable three days. The seal colony was a completely different story. We were blessed with wonderful afternoon light and a very nice sunset. And although we were way too early in the season, there were already a few of the adorable white newborn ‘weaners’. With the hundreds of (Common and Grey) seals around, it was not easy to concentrate on a specific photo or isolate an individual. I got some results that I am happy with, but it is the experience of being a witness of such a spectacle of nature that is the ultimate reward for undertaking a trip like this.