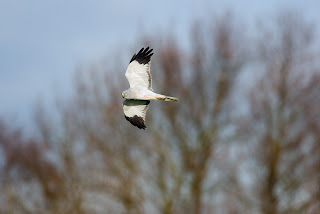 In my previous post, I mentioned I was eagerly awaiting the arrival of one of my favourite wintering guests, the Hen Harrier (Circus cyaneus, Blauwe Kiekendief). I had not even finished writing the blogpost, or my telephone rang. The landowner excitedly informed me that ‘he had returned’ to the fields of joy (and voles). I had to wait until Saturday before I could go out and try to photograph it. And of course, the Harrier was last seen on Wednesday. Not good. So I decided to try some sunrise landscapes. I was out in the field when I got a call that ‘he was patrolling the field’. I jumped in the car and drove over there, only to find empty fields of joy (but many voles).

As I had brought tea and lunch, I decided to sit and wait. Which I did for hours on end, until sunset. The Harrier returned twice, for about a minute each time. His first appearance was abruptly ended by a dog walking its owner, the second hunt was literally blasted by a hunter in the forest who timed his pigeon-fest as bad as possibly possible. I got one half-decent shot of the fleeing Harrier, which can be seen above. You gotta love it. Well, at least he’s back. As soon as it gets colder, he will hunt the fields of joy (and voles) more regularly. If there are any voles left by then, as I witnessed a beautiful male Kestrel (Falco tinninculus, Torenvalk) catch four voles in the course of only a few hours. Unfortunately, he kept a safe distance of more than 100 meters from the car, so no photographs please. Funny thing about the shot above, is that I got a similar one almost a year ago. Probably the same Harrier, and even the same background tree, be it shot from the other side. Only the snow flurry is missing, which I should admit adds a lot to the mood and feel of the final image. Here’s the ‘old’ shot for comparison.