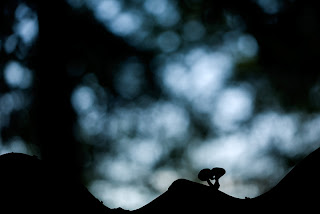 That’s exactly what I did yesterday: I went for a walk. Weather had been dismal all weekend and the weatherman promised a slightly less dismal Sunday morning. When I opened the front door, it immediately got obvious that the perspective of a decent sunrise was going to be an illusion. Thus my favourite playground would have to forego my visit for once and wait for better times. Plan B was to drive to the Fungal Forest and spend a few hours with the macro lens flat on the damp forest floor. I arrived when it was still dark and soon found this duo of Porcelain Fungi on a rotting beech branch on the forest floor. Somehow, it felt like my inspiration had not come with me in the camera bag and was still in the warm bed.

So instead of spending hours to really squeeze every last bit of photographic potential out of the situation, I quit after 15 minutes and decided to take a walk and see what else I could find. It was toadstool and fungi galore everywhere I looked. Not that there was an enormous diversity of species, there just were huge amounts of fungi. Although many of them already were in various terrible states of decay after a few days of windy and wet autumn weather. I had a hard time finding settings that offered potential. Some were too cluttered, others had non-perfect fungi, background fungi too close or too far, too close to the ground for a decent background, and so on. Or maybe my imagination just had become mouldy.

In the end, I had covered a great distance and seen a lot of beautiful things. It just did not want to translate onto digital film. These things happen, I know from personal experience, when you don’t have the internal peace of mind to slow down and get lost in the subject. In those cases, it is best to take a walk. Like the Porcelain Fungi in the photo above: I think it looks as if they are halfway a strenuous hike in mountainous terrain, looking to clear their minds and fill the hole in their heads.