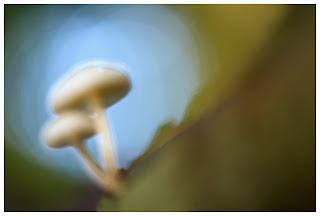 Over the last few weeks, I found lots and lots of toadstools and fungi. They were everywhere and hard to be missed. Last weekend, I finally decided to focus my attention on the fungi and so I went to my favorite nearby fungal forest. You can imagine I was unhappily surprised when it appeared that there were not as many fungi as I had expected. And the few I could find were in a miserable state of being, of course due to the relatively long period of drought and the high autumn temperatures we have seen here lately. But in the end, you often only need a fungus or two to keep you occupied for at least a few hours.

I came across this happy couple of Porcelain Fungi (Oudemansiella mucida, Porseleinzwam) on (of course) a rotting beech tree branch. I spent three full hours on my belly, turning around in the wet soil and rotting leaves and tried all kinds of angles, lenses and illuminations. When I left the scene, my back, shoulders and neck hurt, my hands itched from the bites of mosquitos and numerous other bugs and my clothes smelled like an autumn forest floor (no surprise). Lesson learnt: always bring the anglefinder!

I liked this -almost cartoonish- representation of the scene best, which was achieved by focussing manually just behind the fungi.