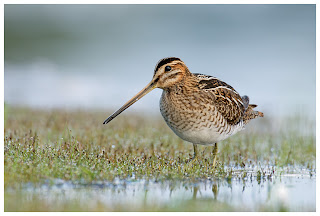 Another morning at the lakeshore. This time, I chose a different spot to position myself, closer to where I had seen the majority of the Lapwings and waders during the previous sessions. But (there is always a but, isn’t it?): the pouring rains earlier in the week had flooded many of the foraging grounds again. So the Lapwings chose yet a different spot to rest and forage. Of course, my horse. On the small ‘island’ in front of me, only a juvenile Little Ringed Plover showed up. I got a few backlit shots with the bird small in the frame. Close, but no cigar.

During the few hours I spent at the lakeshore, several waders flew into my direction, extended their landing gears right where I wanted them to be, but then decided to try their luck elsewhere. Among these were a pair of Common Snipes that landed some 10 meters to my left, but ran off into the high grass immediately. An hour later, I had completely forgotten about them and was checking out the large group of Lapwings through my viewfinder, when I saw something move from the corner of my eye. There were the Snipes, they had waited in the high grass for the full hour! I did not dare to move even the slightest bit and let the boldest of the two shuffle forward a meter. I waited until it had started foraging and then slowly took the first shots. It did not care at all and even started to groom. A few minutes later, the shyest of the duo got nervous for no reason and took off, of course followed by the bolder individual. All in all a very nice ending to an otherwise mediocre session.