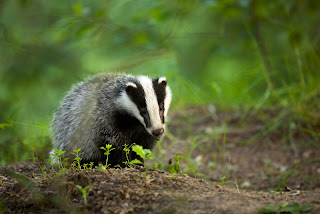 Somehow, weather is always nicest on Tuesdays. At least, so it seems. Will have to do some serious research on the subject and switch my day off at work from Friday to Tuesday if statistics prove my gut-feeling right.
Anyway, since the weather prediction was very good, I decided to once again go to the badger sett after work. Fortunately, there was a slight breeze. Not only good from a scent point of view, but it also kept the number of mozzies manageable. Nonetheless, I put on a beenie and thin gloves to give the remaining thousands no chance to bite me. This way, I did not have to move like a madman all the time to keep the mozzies away, which certainly would have attracted the badger’s attention in a bad way.

Around 8pm, 6 badgers came out of the sett and started the mutual grooming ritual that I have come to get used to. The sunlight managed to hit the forest floor on various spots across the sett. But somehow, badgers don’t seem to like sunlight and they carefully chose shaded spots to perform their bathroom sessions. Sunglasses, anyone? Too bad, as I really wanted some photographs with sunlight included, to stand out from the images I already had from this location. After half an hour, grooming was finished and the gang went on a catering mission. The youngsters have already grown so much that they too go and look for their own food, instead rushing after eachother around trees. Will have to visit this sett earlier next year. More interaction between the youngsters, but also less foliage and thus more sunlight on the filmsett (pun intended).

The next hour, the remaining 5 badgers also showed themselves. Last one to get up and out was again the big boar, who obviously likes a sleep-in. Funny to watch him feverishly check out all the pipes in search of relatives. Over the course of an hour, the badgers return to the sett every now and then, because badgers tend to feed in a ‘flower pattern’. They walk a few hundred meters and return using the same path. Then they move in a slightly different direction and return using the same route. And so on, and so on. In the end, I got some nice images, but nothing very different from what I already had. Will have to think hard what else I can get at this location. I have thought about wide-angle shots with an IR-beam, but the badgers use no fixed trails to and from the sett. They do a bit further from the sett, but that terrain is open to everyone and thus not so suitable for this kind of photography. Especially since the closest neighbour (a farmer some two hundred meters away) does not yet have the slightest idea about his 11 neighbours.