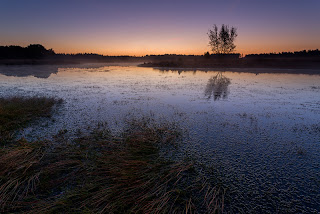 Autumn is slowly but steadily taking over the great outdoors. Days are shortening and the leaves of decidious trees are preparing for the annual downtrip from canopy to soil. I will probably be following the process on my own personal playground. Partly because I want to capture its beauty in all seasons, partly because there are no vast deciduous forest in the direct area to photograph autumn colors. I might travel a bit further from home now and then, because spending a beautiful autumn day in a colorful forest is one of those tiny, little pleasures in life that make me way happier than they reasonably should. A bit like the first cup of coffee in the morning. Or even better, a combination of both!

A still morning in the outdoors works like a strong tranquilizer to me, in every season. I went out for a dose on two mornings this weekend. Funny thing is that the later the sun rises, the more problematic it gets for me to get out of bed. Might have to do something with the temperature outside the bed. Alas, I made it in time. On Friday, a thick cloudcover promised little of a good sunrise. But after a long wait, I got 30 seconds of a pink blast before everything turned to grey again. I was hard to get anything nice from the fleeting moment though. These kinds of skies work best with a reflection or some awe inspiring mountain scene. But since a dry spell has run all fens dry and the nearest mountains are hundreds of miles away, I had to make do with some out of bloom heather. Sunday featured a completely clear sky. I went to the other side of the area to shoot sunrise at a fen that still contains water. No clouds meant no spectacular reflection shots, but I like the tranquil nature of the image above. Just a small orange band above the horizon gives a hint of the time of day. After a few shots, the color had gone and I went to look for dew-covered Damselflies again. I found hundreds, all close to tiny pine trees in the heather to shelter from the wind. A nice creative session with these beautiful creatures ended my weekend therapy. Now I am back in the office, the effect of the tranquilizer has gone, and I am already looking forward to the next dose. But first, the second coffee of the day!