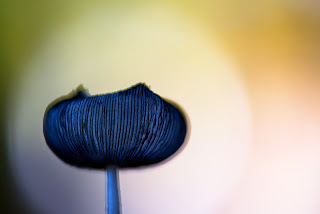 After the rainy days of last week, fungi really seem to pop up like daisies. The ones from two weeks ago have rapidly faded and returned to their soily underground residences, but new ones abound. I had teamed up with fellow photographer Wilco Dragt to spend the day with fungus photography. The first few hours were decent, but nothing spectacular.

Then the woodland’s warden, who I happen to know well, phoned. He had seen my car and wanted to let me know he had found several bats behind the shutters of his nearby house. We went over to see the bats and got invited for a welcome cup of coffee.

I asked the warden if he knew a spot where we would be able to find Hare’s Foot Inkcap (Coprinus lagopus, Hazepootje), a delicate species of fungus I had never seen and really wanted to photograph. He did not. Then, in midst of a conservation conversation, the warden’s wife came in and told us about a nearby spot where she had previously seen hundreds of fungi of different kinds. We went over, and found dozens of, indeed, Hare’s Foot Inkcap! Here’s one of the many results. These are quite photogenic fungi, with their translucent, oriental paper-like appearance.