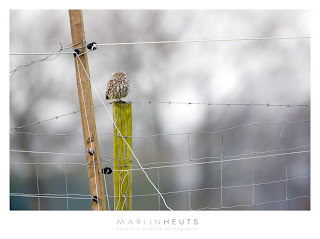 I honestly cannot remember the last time that I did not produce a single image worth sharing during a weekend. But now’s the time, and I truly hope it will not happen too often again. The Sunday morning was spent in the Little Owl hide, but it really is not the most interesting time of the breeding cycle to be there. The female spends most of the time incubating the eggs, the male delivers fastfood during the night and rests his case during the day. Thus I got nothing over 4 hours in the hide. The worst thing was that I witnessed a perfect sky from within the hide. If only I had decided to do landscape photography instead. I guess it would be a good idea to only return to the hide when the chicks have hatched and the search for food becomes more frantic.

In the evening, I visited a fox den that I am certain is inhabited. In the two hours that I observed the den, I saw nothing but flat grass, prey remants and a lot of tracks in the sand. The cubs may still be very small and only occasionally leave the den, but one never knows for sure until they are in actual view. It never ceases to amaze me how the age of cubs can vary between dens. I saw photographs on the internet of tiny, dark cubs taken last weekend, next to photographs of playful, adolescent cubs taken on the same day. I will go back soon and hope for better luck. Let the Waiting Games continue! Above is the male Little Owl (from last week) practising his own little waiting game. He was more succesful than I was, catching several tasty grubs.