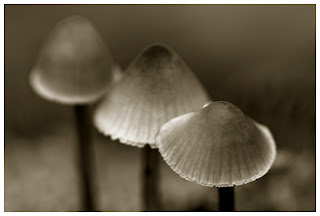 Yes, another weekend of fungal photography. With the heavy rains of the last days, fungi and toadstools are popping up virtually everywhere. Funny thing is that I went to local forests to photograph them, when today I found out that we have several very pretty fungi in our own little city garden.

About two years ago, we placed several rotten branches and a heavy piece of three trunk in the garden. It appears the fungi feel right at home on these chunks of wood. Even the second-hand forest is very much alive!.

The more time I devote to toadstool photography, the harder I find it to create something ‘different’ and creative. After spending several hours with a sole little toadstool, I had photographed it from every imagineable angle and I had used all kinds of light reflectors and refractors. So I decided to create the ‘difference’ in Photoshop. The image above is not really special by itself, just three toadstools in a row. It was converted into a duotone, using the technique described in one of the very first entries into this blog, somewhere around August 2008. I think the brownish/sepia tones fit the current season quite well.