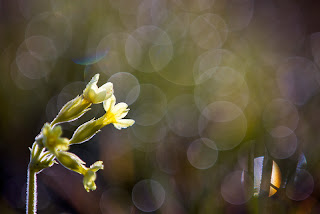 A beautiful morning was predicted, so with good hopes I went to a tiny nature reserve with (very) wet grasslands. In summer, one can find orchids and lots of insects there. In early spring, it’s a good place for True Oxlip (Primulia elatior, Slanke Sleutelbloem). I had plans to silhouette the translucent flowers against the orange of the rising sun. So I got up early (it was not yet daylight saving time) and drove the shortest route to the reserve. To my great dismay, the road was blocked because of maintenance and I was sent another direction. The detour to the reserve was so huge that the sun was already up when I got there. And when I finally found a suitable composition, the sun was so high that I could not get low enough to frame the flowers against the rising sun without digging a hole.

Also, the best of the orange colors had long gone. I made the best of the situation and made use of the dewdrops on the grasses surrounding the Oxlips. With backlit conditions and wide open apertures, all sizes of circles are formed in the out-of-focus background. In this particular image, it almost looks as if the Oxlip is a confetti canon, spraying its fun load into the air. No pun intended…

When I was finished, I was completely soaked. The grasslands were more wet than moist and I had been flat on the ground for quite a while. Instead of going home, I walked to an unsightly piece of (again) wet woodland. I looks like a patch of dead scrub, but when surveyed more closely, the ground is covered by hundreds of Wood Anemones (Anemone nemorosa, Bosanemoon). I found it hard to get anything worthwhile out of the session, as they are tiny, close to the woodland floor and surrounded by dense scrub everywhere. Moreover, the delicate flowers only open up when the sun is up in the sky, with harsh light as a result. It would have been much better to retry around sunset, the flowers being still open and the light being soft and warm. But alas, no time to go back, maybe next week.