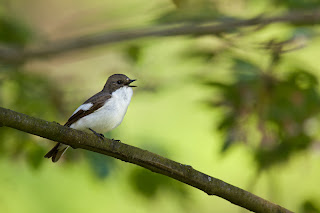 Hopefully you’ve enjoyed the long Easter weekend with beautiful weather as much as I did. Most of the ‘photography time’ was spent observing and researching for two small projects that I hope to reap the fruits of in the next few weeks. They both look moderately promising, so stay tuned for (hopefully) the first results.

Of course I had to push the button at least once during the weekend, and so I was happy to be invited by a good friend who reported a rather confiding Pied Flycatcher (Ficedula hypoleuca, Bonte Vliegenvanger) that had lived on his terrace for most of the week.

When I got there, the bachelor male had moved 50 meters to a large tree with a nesting box. He sang his heart out to defend the nesting box and hopefully attract a female. Ironically, the nesting box had long been taken by a pair of Blue Tit (Parus caeruleus, Pimpelmees) and some ten meters to the right, a pair of Pied Flycatchers had taken up residence. He did not seem to bother and went on and on singing and checking the nesting box. That resulted in a fight with the close neighbour on multiple occasions. But, according to the lastest reports, he is still there! The dappled sunlight through the canopy provides for some interesting lighting and the limited and soft DOF of the fullframe 5DII made for a beautiful background in most of the images. I have completely abandoned the clear, boring, evenly colored backgrounds and now tend to look for out of focus patterns or color patches. Much more natural and interesting, at least to me.