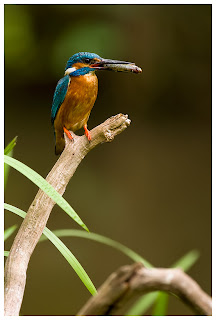 Albeit not a very impressive one, the Dutch Lions gained their second victory at the Worldcup in South Africa. This time, they beat the Japanese squad with 1-0. To be honest, it was one long boring game to watch, and if it had not been the Dutch that played, I would have turned off the tv. In the end, a terrible mistake by the Japanese goalie was needed to score the only goal of the game.

Not so for the Kingfisher male, who does not need luck at all. He uses a terrific combination of speed and skill to score his sushi on a daily basis. And even his discipline is completely up to par, as he returns to the nesting pipe with fresh seafood exactly every twenty minutes.

Looking at the size of the fish, it seems the chicks have grown a lot since last weekend. The female also brings in fish, but she has the nasty habit to not use the perch and fly directly towards the nesting cavity. Both the male and female do not dive into the stream directly after leaving the nest to get rid of the fishy smell.

They did so last year, which back then provided me with lots of photographic opportunities, as the first perch they came across after coming out of the water was mine.
I’ll keep an eye on the couple. As soon as they start to leave the nesting pipe backwards, the chicks will be near the entrance and can fledge any day. I still hope for a shot of several chicks on one perch.