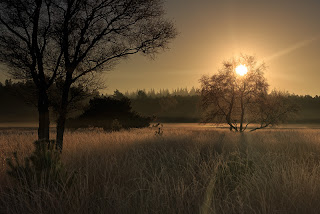 Those who regularly read my blog know about my frustration with the weather forecast and my lousy timing in that respect. Well, for a change, I got it right this weekend. Friday morning was said to be a true early winter’s morning with light frost and possibly some fog. When I got out the door, the sky was clear and I immediately got that crunchy feeling in my nose that only occurs when temperatures fall below zero. Call me moderately masochistic, but I like it! Friend and colleague Gerard Schouten joined me for the morning and when we arrived at the intended location, fog obscured the ground level and the frosty open heathland was dimly lit by an almost full moon. That made for interesting circumstances and compositions and I got some decent results.

The only thing missing was an interesting sky, but you can’t have it all and two out of three (frost and fog and sky) ain’t bad. I left the sky out of most of my compositions and focussed on the frosted grasses and the ultrathin layer of ice on the fens. Later on, when the sun rose above the treeline, the remaining fog along the forest edge was set on fire and I positioned the camera so that the sun rose behind a tree. This makes it easier (or less hard, actually) to control the flare that was quite heavy due to shooting right into the sun with filters on the lens. A nice side effect is that the tree literally breaks the light into clearly visible rays. I kept the exposure deliberately low for a moody effect and used a 3-stops ND Grad to keep some detail in the foreground grasses. I never shot this group of trees before, which goes to show I am not finished at this location yet. The forecast for the coming week promises cold and even snow. I look forward to it, as subzeroes are hot!