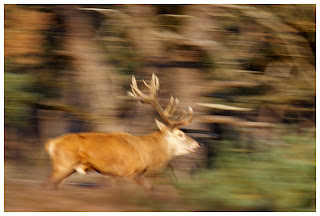 The term stuck in a rut can be used figuratively to refer to a situation in which, as time progresses, the situation is unable to be changed or steered in a desired way (Wikipedia).

When a photographer is stuck in a rut, it usually means he or she produces the same (kind of) images again and again, is unable to look at subjects in a new and fresh way and is unable to create creative and refreshing images. Been there, done that, many times actually, and will be there again, I’m sure.

But this time, it’s not me who’s stuck in a rut, it’s the Red Deer (Cervus elaphus, Edelhert). As Wikipedia puts it: the rut is the mating season of ruminant animals such as deer, sheep, elk, moose, caribou, ibex, goats, pronghorn and Asian and African antelope. During the rut (also known as the rutting period, and in sheep sometimes as tupping), males often rub their antlers or horns on trees or shrubs, fight with each other, wallow in mud or dust, and herd estrus females together.

In the Netherlands, the Red Deer rut can only be witnessed in two places: the Veluwe and the Oostvaardersplassen. The latter being not very accessible and the former being on the way to our holiday address, we visited the Veluwe for an afternoon to watch the spectacle unfold. It truly was a spectacle, with several stags grunting their hearts out and gathering their harem of hinds (as seen in the panned image above).

What made the experience a bit less overwhelming and even zoo-like, were both the well-timed appeareance of a park ranger with a bucket full of apples and other deer goodies, and the presence of about 400 other wildlife enthousiasts along the short stretch of road. There must have been at least 1 million euros worth of camera gear pointed towards the star of the show, a large stag. I’ll call him the Million Dollar Stag from now on.