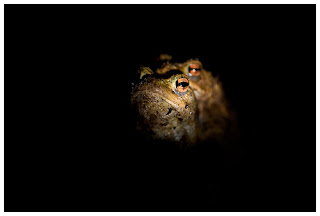 No time to go out and photograph this weekend, lots of household chores to do, as well as a quickstart to the annual springcleaning. So here’s one from last week. Back then, temperatures rose to double digits for the first time, a sure sign that the annual Toad migration would be on the verge of happening. So I went out late one evening to photograph the Toads on their quest from the hibernation spots to the spawning grounds. Although the peak was said to have been on Friday, we still found hundreds of Toads on Saturday evening. Enough subjects to photograph.

The place I usually go to photograph the Toads is a sandy forest trail. As amphibians tend to have a moist skin, sand and other forest debris sticks to it and the Toads are sometimes completely covered. Some of them look like creatures from another planet. Here’s a couple (called an amplex), lit only by a torch. I also took lots of photographs with the use of flash and some sort of a large softbox. Those shots look more as if they have been taken during daytime. I prefer the secretive, nightly look of the ones lit by the torch.