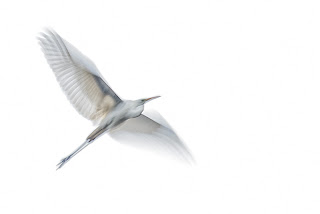 A last-minute contribution to the blog. Around the holidays, I have hardly been out with the camera, the weather not being particularly inviting for a stint with the camera. I went out one grey morning to photograph swans at their take off to the foraging grounds. When I arrived, still in darkness, they were already in the air, a bit early in my experience. I crawled to the water’s edge to see what else I could photograph. Of course all the ducks were gone in a split-second. Only about a dozen sleeping Great Egrets (Ardea alba, Grote Zilverreiger) stayed at the scene. A few minutes later, they all awoke and one by one flew away to feed in the area individually.

I was fortunate a rather strong wind blew from behind me, forcing the egrets to take off in my direction. Because of the lack of light, I used a very long shutterspeed for a nice blur-effect in the wings. Out of the dozens of shots, only in this one did the egret keep its head relatively still, a requirement for the result to at least vaguely resemble an egret. No snow or ice, but still a nice high-key, snowy image to close the photographic year with.

I wish you all a very nice last day of 2011 and hope 2012 offers a lot of willing subjects and boatloads of wonderful light. See you next year.