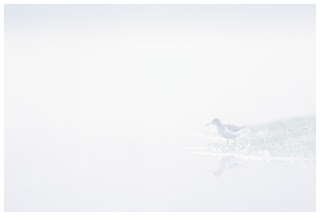 August and september always seem to be a difficult time for the photographer in me. Breeding season is over, as is the roe deer rut, and it is still way too early for feeding stations and fungi. Which means I have to think hard what to photograph, or just go out without a true photographic plan in mind.

It is also the time to work away a backlog in image processing and start making preparations for next season. Some very interesting plans in mind that are a true photographic challenge. I hope to be able to show the results next spring!

Last Friday, sunrise was predicted to be nice with good chances for fog. So the logical thought was to go to a large body of water with possibly some birds around. Now is the time that waders and stilts start to migrate and even in this part of the country some of them can be found along the shores of inland lakes. I arrived early at the scene and got down on my belly along the goose-crap-covered shore. Within minutes, a Common Sandpiper arrived and slowly fouraged into my direction. They never stand still and with the sun not yet above the horizon, I struggled to get a sharp image. After a while, I tried to get pan blurs with the head relatively sharp. Unfortunately, all of my attempts failed miserably. In the end, I got one sharp portrait and the image shown above, which I like best. Although the head is sharp, the rest of the bird shows the movement that goes with their typical, nervous feeding behavior. When the sun finally peeked through and the fog slowly disappeared, the Sandpiper had gone. Four Common Snipes foraged some distance away, but as soon as I tried to crawl a bit closer, some 400 lapwing policemen got nervous. As I did not want to alarm the birds, I backed off and went home. Lets try again next weekend.