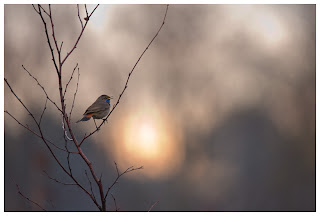 Last week, I wrote about the x-factor of the Bluethroat. Well, last Friday I went back to nature’s studio to listen to another live concert. It was a disappointing show and all three male contestants had to go to the sing-off because of a very meager performance. In the end, the jury (me) decided to send all three home because of a lack of effort and ambition.

In this photo, one of the wannabee-stars has just gotten onto the stage and into the spotlight. He turned out to have forgotten the lyrics.

On a more serious note: I spotted two female Bluethroats, which explains the deafening silence. As I wrote last week, once the females have arrived and couples have been formed, the males don’t display and sing that much anymore. Most energy goes into nest building. When they do sing, it’s not as enthousiastic as in the first weeks after their arrival and they hardly ever show the yellow throat interior anymore. So it’s time to look for new subjects for the next few weeks.