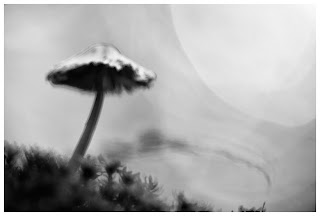 Our camera club had planned a trip to an ancient deciduous forest sometime ago that was to take place this weekend. The goal was to photograph toadstools and/or fungi, which should be available in great numbers and varieties. Much to our surprise, most trees still featured green leaves instead of the explosion of warm hues we had expected. Even worse, it appeared the fungus season has now officially been closed! We spent the better part of the day searching for subjects to photograph. Everywhere we looked, we found traces of what used to be toadstools and fungi.

What once had been all kinds of beautiful shapes and colors, now were only slimy, black remnants. The best we could find were a few decaying individuals, so those were the ones that feature in the few images I shot. As they certainly did not look their best, I once again reverted to a B&W conversion. With a pinkish toadstool and a greenish foreground,  the B&W would become a contrasty one if I used a red or green filter during the conversion. The red filter yielded the best result in my opinion. With the fungi gone, it’s time for a new project. I have several ideas in mind, let’s see which ones are the most promising.