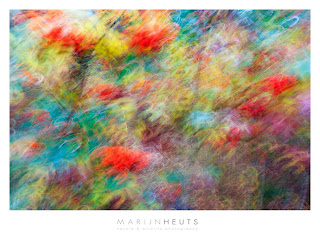 My two daughters are both suffering from chicken pocks, which makes a good night’s sleep an illusion. I did set the alarm, but for the first time in ages decided to ignore it and go back to sleep. It was not even a tiny voice in the back of my head telling me it was wise to get some much needed rest. It was more like a big band announcing that same message. Message taken! So here’s one from last week. On a morning with grey skies, I looked for patterns and colors to photograph, since the wider landscape had not much on offer. I found a rather large area covered in Rowan (Sorbus aucuparia, Lijsterbes) bushes. They were heavy from an enormous load of berries, and some of the leaves had already colored. After having shot the regular images of the Rowan bushes, I went into creative mode. I manually focussed behind the bush, adjusted my composition until the spread of colored patches was to my liking and pressed the shutter. I chose a rather slow shutterspeed and moved the lens during the exposure in a circular manner. The result is an abstract rendition of the explosion of color that I could not express on digital film using more orthodox methods.