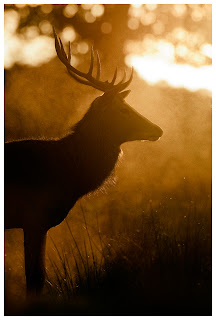 Not much time for photography this weekend, but I did spend lots of time outdoors. I walked through autumn colored beech forests and juniper covered fields on Friday and Sunday. On Saturday, I joined “Natuurwerkdag”, an initiative that attract lots of volunteers that are willing to work a day in the outdoors.

And besides, I have an enormous postprocessing backlog. Still lots of images from Bulgaria and even Sweden (2008!) to go through, and of course the recent bulk of images from the UK.
I posted a Grey Seal pup last week, here’s one from the other species that we were after: Red Deer.

There were lots of Red Deer, with only a few dominant stags. Because of the relatively high temperatures, there was not a lot of activtity going on betweeen either the dominant stags or between stags and hinds. We were fortunate to witness an early morning fight between to stags, and the resulting copulation between the victor and the hind. All of course in very low light levels.

With the lack of low temperatures, there was no early morning fog and even in backlight, the clouds of condensed breath could hardly be noticed. So much for the photographic plans I had in mind. I was lucky that one afternoon, when the sun just peeked through the clouds, this stag shook off lots of dust right against the light. Enough for me to create this atmospheric image. I’m happy with the result, although I wish there was more empty space at the bottom for the virtual hooves.