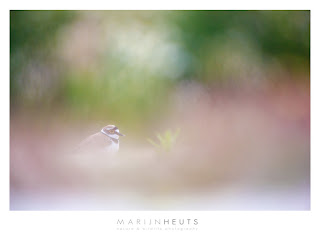 With the Little Owl project having come to and end, I found myself pondering about photographic subjects to bridge the gap until the heather is in full bloom and nights start to cool off. Some time ago, I found several pairs of Little Ringed Plover (Charadrius dubius; Kleine Plevier) at recently created ponds with sandy shores and islands.  These birds are true pioneers and are the first to inhabit (or occupy) new nature. Of the three pairs that I found back then, only one adult bird and two fully grown chicks were left when I finally had time to lay down on the sandy shores. That made things more difficult than I had expected. Little Ringed Plovers, like most waders and stilts, are relatively confiding and not that hard to photograph. But with chicks around, their attitude towards a friendly photographer suddenly changes. The adult was constantly on the move and kept calling to the chicks, that as a result remained hidden in the pioneer vegetation for most of the time.

That pioneer vegetation mainly consists of small plants, but even small plants look like a forest with giant trees when a tiny plover is hidden between them. I had a hard time to get a clear view of the plover. Only after struggling for a while, did it dawn on me that I could use the limitations of the moment to my advantage. So I deliberately shot through the vegetation close to the lens for a more dreamy and colorful feel to the resulting photographs. After several hours of crawling around, trying to dodge the ever present goose crap, my neck, back and shoulders were numb and I called it a day. Even better, because I was hidden in the vegetation and had no need to get up close and personal, the adult calmed down and did the usual stretchy sleepy routine right in front of me. The chicks however stayed within the safety of the higher vegetation along the edge of the pond and I never got a chance to photograph them.