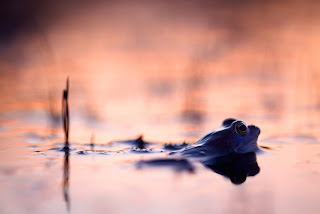 It’s that time of year again. Last year I missed the spectacle of the male Moorfrogs (Rana arvalis, Heikikker) turning loud and blue because I was in Iceland. No travel plans this time so I really hoped the short spawning period would somehow overlap with the weekend. And it did.
From the local forester, I heard he had already seen ‘plopping’ Moorfrogs last Monday, so to be honest I was afraid I was much too late. But he had seen only a few and after Monday, the weather had been relatively cold. Moorfrogs don’t like that, their sexual agenda is more or less based on water temperature. Yes, they like it hot. So I had some hope they had only just started and the best was yet to come.

Yesterday when the sun was out and the temperature was pleasant, I went for a stroll with my daughter and father through the moorland and kept an ear or two open for plopping sounds. I was surprised to hear a lot of Moorfrogs in an area I had searched in previous years without success. It seems all conservation endeavours (mainly raising the water level) now yield results. Late in the afternoon, I went back without my daughter and father but with a wading suit and a camera and spent the last hour of the day among hundreds of horny blue male Moorfrogs, plopping their froggy hearts out. I tried to get something different from the regular clean portraits and settled on backlight and a somewhat cluttered scene.

And of course, no matter how careful I thought I was, I again experienced that horrible feeling when the cold water (relative to my body temperature, because other than a Moorfrog, I happen to be warmblooded) finds its way into the wading suit because you lean forward a tiny little too much.