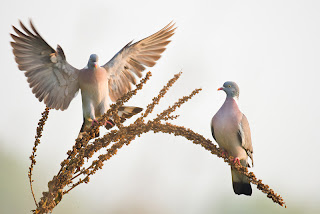 Yesterday, the winners of the German 2012 Glanzlichter nature photo competition were announced on their website. I am happy to announce that my image of two Wood Pigeons was awarded a Highly Commended in the ‘Animal Pairs’ Category. Congratulations to all other winners, amongst them of course a few fellow Dutchmen.

This is one of those images that did not take a lot of planning, but just happened. In May 2010, I had put up a tent hide to photograph Common Partridges (Perdix perdix, Patrijs) that foraged along some rough patches of wildflowers at the edge of an arable field.

Although the main focus was on the Common Partridges, I also kept an eye on the high stems of the Great Mullein (Verbascum thapsus, Koningskaars), that were often used by Common Stonechats (Saxicola torquatus, Roodborsttapuit) to hunt from. On one occasion, a Wood Pigeon (Columba palumbus, Houtduif) landed on the Great Mullein, which completely bended under the weight of the relatively heavy Pigeon. I decided to photograph this rather funny sight, and when I did I saw a grey blob approach fast through (well, not actually through) the viewfinder. I hit the shutter button without further thinking, and this is when the 10 fps of the 1D Mark III really comes to its own. Only one shot out of a dozen featured what appeared to be a second Wood Pigeon in a perfect landing pose. I consider this a last tribute to my trusty 1D Mark III, which recently found a new owner.