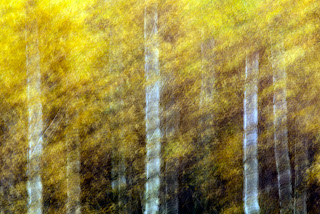 During our week at sea, we were not really spoiled with an abundance of autumn colors. Only a few trees and shrubs in the dunes had put on their most colorful coats, but vegetation is sparse along the coast, so they were lone dissonants in an otherwise dullish landscape. From checking the internet every now and then, I learnt that in some places in the country, autumn colors were still at their best. Because I had not been at my personal playground for some three weeks, I was anxious to know what it would look like and if there were any vibrant hues to be found. So I went back at the first possible occasion and found mixed opportunities. Many of the oaks and larches had already turned a dead brown, while most of the birches were set ablaze with all kinds of yellows. Unfortunately, this particular forest does not feature a lot of beech trees, otherwise I would have certainly tried them.

I decided to stick to the yellows of the birches and see what I could get. The regular photographs were nice, but nothing special. The weather was rather bland with a grey sky, and I had hoped to combine the yellows with a pink sunrise. So instead I zoomed in on the trees and things immediately started to look better. Only when I got to the point where moving the camera during a long exposure was involved, did I really like the results. As usual with this technique, the vast majority of photographs ends in the enormous round archive and only a handful delivers something worthwhile. To me this image represents the day best: strong, vibrant colors, the rustle of leaves in the autumn wind, and the trunks of the birches prominently in front, because they are what eventually will be left of the tree when winter sets in. The use of a polarizer further enhanced the saturation of the leaves and the contrast in the image.