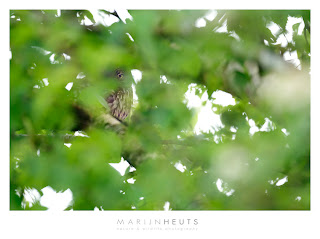 Following up on the previous post, Thursday had us say goodbye to ‘opa Bim’ for the very last time, after only a few days in the hospital. So the last week has been a very emotional and hectic ride, with his final travel yet to come. Of course photography was not on my mind at all, but I had to get away from it all for a few hours just to give my head some rest and take some distance to put things in perspective. So I went for a short try in the hide one evening. The Little Owl couple only showed when the best light was gone and a bit far away, but at least they are still there. Even better, it has been confirmed that all four eggs have hatched and so now there are four hungry mouths to feed. I really look forward to spending more mornings and evenings with the couple and their owlets when things have calmed down a little in our private life.

The owls surprise me every time with their choice of vantage points and with their antics. Up to now it has been very hard to predict when and where they will show up and what their next move will be. I think that’s a good thing. Although I cannot work on shots that are on my to do list (and there are many!), it forces me to make the best of the situations presented to me and use every last bit of creativity that I have within me. For example, the image above is from a session when the male was in close proximity to the nest box all morning, but did not do a lot more than preen and doze away in a secluded and seemingly comfortable spot between dense foliage. I could have cursed for not being able to get a clean shot, but I tried to cope with what I had. A stiff wind made the leaves move around constantly and every now and then I could see part of the owl through a small, moving gap in the foliage. After several tries I succeeded in capturing the short, fleeting moment and even got lucky because the owl looked straight at me. I guess one of the reasons not a lot of people get to see Little Owls is, apart from being, well, little, that they are so damn good at hiding in broad daylight. Some bold individuals love to bask in the warm morning sun in full public view, but most of the day is spent in hiding, the owls only betrayed by alarming Blackbirds that stumble upon a dozing individual.

This also was one of those occasions when the 7D I recently bought secondhand really comes in its own. The smaller sensor means the subject is rendered 2.5 times as large in the frame, with still a decent 18MP file size. The full frame shots I got just did not work, the owl being too small in the frame.