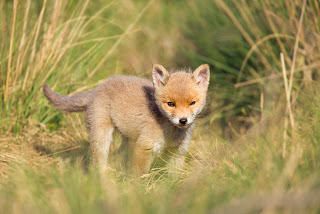 At last. This weekend saw me staring at a sandy hole for another 10 hours. Two very early mornings,  I was in position at 5.15 am already, in anxious anticipation of events that would unfold in front of me. Or not. On Friday, at 6.15 I saw movement in the not too tall grass. A patch of wooly grey fur made its way through the grass and I knew it was a fox pup. I could not see the head or face, as the pup was still a tiny one. After a few seconds, the fur retreated into the safety of the den again. This procedure repeated itself around 9.15 and that was it for the day. At least now I knew there actually live foxes in the den. I was surprised though to see only one.

A well-needed sleep in on Saturday was followed by a second early session on Sunday. I had good hopes, but it was not until 8.30 that a fox pup appeared in my viewfinder. This time a little further to the back and more in the little open space available. With shaky fingers I pressed the shutter button, happy to have finally gotten the first shots of the season after all these hours of painstaking research and observation. With these in the bag, I could relax and enjoy the sighting of a young fox pup exploring a still tiny world in the morning sun. Again, I was surprised to see only one. I will definitely be back at the scene for more kiddy fox experience, but not before we have finished our holiday. Hope they (?) will still be there by then.