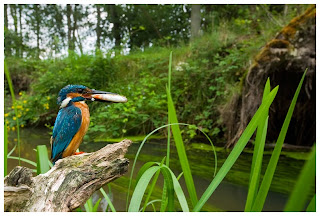 In my post of July 29, I mentioned that I planned to visit the kingfisher site in hopes of a third brood. Well, I did so last week and to my relief, I found two very busy parents and some noisy chicks in a (new) pipe in the breeding wall. I did not get any useful images though. So I went back last weekend, this time with the wide-angle lens and a remote control. I placed the setup in the stream near their favourite perch (a mere 20 centimeters away) and waited several hours under my camo cloth. During 4 hours, both the male and female paid the odd 10 visits to the site. 20 chances for a good shot, you might think.

1. The female smelled the scent of clear and present danger and flew directly into the nesting pipe every time: -10
2. The male came from the wrong direction (even from right behind me) several times: -4
3. The male was chased away by unleashed dogs two times (tripod stumbled, but fortunately did not fall): -2
4. The male decided twice that the camera would make for a nice perch too (no pics, but it did happen): -2

Simple math then yields two chances for a photograph. The first time, the dappled sunlight only hit the background, not the kingfisher. Not enough light on the background for a silhouet, so no keeper. The second time, a cloud obscured the direct sunlight and it finally all came together. A happy photographer left the scene. Although I have not seen any of the chicks from the three broods, I am confident a healthy kingfisher population will try to beat this years winter. Hope to see at least two survivors next year, same time, same place, same photographer!