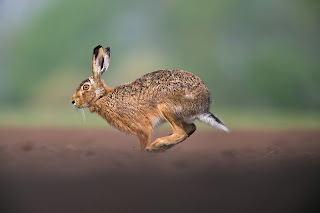 Still no photographic rewards for all the trouble I’ve been going through searching for and waiting at a couple of fox dens in the area.

It appears the most promising location has been ‘cleared’ by a local hunter, which makes me very, very angry. Not only because I think foxes are beautiful animals that are blamed for much more than they are really guilty of, but also (and mainly) because the den is situated in a conservation area that is a no-go area for an armed hunter! If I ever see one caught-in-the-act, I will not hesitate to photograph him and use the material to put him to shame.

On the way back home, I saw a Brown Hare (Lepus europaeus, Haas) rapidly run through a field to the right of my car. It carefully crossed the dustroad right in front of the car, only to increase speed again and cross a field to the left of the car. No chance for a photograph but a nice sighting anyway. I wanted to leave the spot when I saw another hare run towards the car, but still a good distance away. I reckoned it could well travel the same route as its friend. So I positioned myself in a dry ditch along the field to the left of the car. After several minutes, I saw two large ears some 20 meters to my right scan the surroundings. When everything seemed safe, the hare left cover and ran straight past my position, only some 18 meters away! This is where the 5DII shows its weakness: it features only 3 fps and the AF is terribly slow. Still, I managed to get a couple of sharp, fullframe shots. I am very happy to know I am able to outwit the average hare. Hopefully I’ll be able to say the exact same about foxes during the next few weeks…