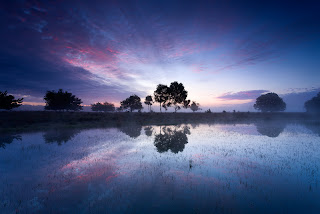 Having been very fortunate with my choice of early mornings lately, things were bound to turn for the worst sooner than later and that’s exactly what happened last weekend. On Friday, I got out of bed at 4.30, only to step out the door and be greeted by 21 degrees Celcius and a flat and bland sky. Being awake and all, I decided to still go out and see what I could get. After an hour of waiting in the company of a buzzing and biting army of mozzies, suddenly a thin layer of ground fog formed, only to evaporate into thin air as quickly as my good hope. So no decent circumstances for good landcape shots, but I did find a promising vantage point to photograph from on better days.

I went to check on a few areas that have proven to be good for Roe Deer and I indeed found several and got some decent shots to add to the archive. Nothing spectacular though. Later in the morning I checked on a new Kingfisher site, where a male tends to dive, wash and preen often and for long periods. It looked promising. On Sunday evening, I went back with the camera for an hour and got my first registration shots. The site needs some work, but I am sure it will deliver in the end. The best thing is that other people are not allowed to enter the area, so no bikers, hikers or dogs to goof up my efforts and I only have myself to blame when things go haywire.

The photograph above is from a week earlier, when I chose exactly the right morning. It was to be the first warm day after a spell of rainy weather, so chances for fog were good. And indeed, a nice blanket of groundfog had formed overnight. The sky was partly cloudy, which is perfect because the colors of the rising sun have to hit something to have any effect. It did not get any more colorful than in this shot, because a band of low cloud cover prevented the sun from hitting all clouds, but I like the subtle effect. Same location as my blogpost of three weeks ago, completely different shot with more water in the fen and a different sunrise. That’s what I love about landscape photography and will keep me going back to the same locations over and over again. After the sun had risen, the fog was set on fire, as were the heathland grasses, which provided me with another 30 minutes of great opportunities. It really was one fine day!