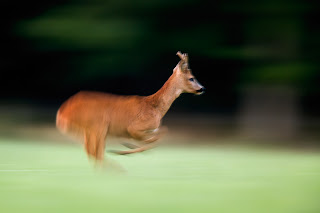 As famous Spanish poet Enrique Iglesias beautifully put in words: you can run, you can hide, but you can’t escape my love. Little did I know back then in 2001 that the song, featuring Russian doe Anna Kournikova in the video, was all about the Roe Deer rutting season. Now I do.

I mentioned in my previous post that after every evening landscape photography session, I would find Roe Deer on the way home. The current clear skies don’t offer promising sunsets, so I decided to dedicate some quality time to them. And thus I found myself covered by a camocloth (which double functions as a mozzie and horse-fly guard) underneath a tree at the edge of a meadow one early evening. Before long, a lone doe came out of the forest cover, gracefully jumped over the fence and started foraging ever so slowly towards me. Only to be spooked by a cyclist and she ran back into the woods. I waited another hour in the heat of the evening sun when a doe with fawn appeared on the scene. They stayed quite some distance away, very alert for something behind the trees behind my back. That something appeared to be a buck chasing another doe. An interesting situation developed when the buck clearly could not cope with the luxury of two willing ladies and started chasing them both. Even the fawn had to run from the buck a few times. After a few minutes, the buck had made his mind and settled for the childless lady, an understandable decision if you ask me. He followed her and sniffed her behind for some more minutes. She tried to play hard to get but was obviously open to ideas. And thus he really went for it and mounted her several times. Work being done, both of them ran off barking loudly, leaving the other doe and her fawn speechless. This mother will have some explaining to do to her kid about the birds and the bees and the deer. Maybe Enriques lyrics can aid in the task.