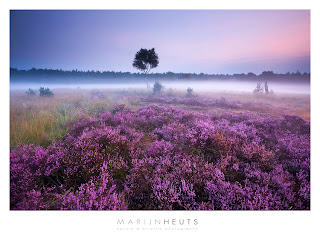 The urban dictionary explains it as follows. Dud: a malfunctioning or failed idea, object or instance, an unfulfilled expectation. Sunrises and sunsets are often duds, expecially when predictions are good, hopes are high and expectations are great. As much as I hate duds, the worst are when the weather app makes a false promise and even continues to promise a clear sky when you are actually in the field under the thickest cloudcover ever. More often than not, it takes multiple uneventful outings before the photographer is rewarded with that perfect sunrise. And ‘multiple’ can be any number. During my short holiday I had a score of 3 great sunrises out of 4. That is the exception to the rule, since the rate more often is in the league of 1:5 or even 1:10. Over the course of the last 10 days, I went out on 5 promising early mornings with good hopes to capture the flowering pinky purple heather under an equally pinky purple sky, with a thin layer of groundfog as icing on the cake. At least, the weather app made me believe I was in for a treat.  I successively witnessed a clear sky with no groundfog, a grey sky with rapidly disappearing groundfog, a gloomy grey sky with no groundfog and a muted sky with a little groundfog before on day 5 it all came together. Although the sun eventually lost the battle against some persistent cloudcover, the pre-sunrise hour was great. From the many previous visits to the area, I knew exactly where to go and could make the best out of the situation.

On a technical note, the more purple heather is included in the composition, the more the white balance will lean towards the green side in a feable attempt to correct the magenta ‘cast’ (which is not a cast, but the actual color of the subject!). That holds true both in the camera’s AWB setting as in Lightrooms ‘auto WB’ setting. The result is flat colored heather, golden grass that looks green, and a cyan-greenish sky that looks truly awful. The ‘greenery-effect’ is even worse in the pre-sunrise light that is often red/pink-colored and thus makes the dominant pinky purple color in the photo even stronger. So I had to slightly cool (add blue to) the white balance in Lightroom and also add a touch of magenta to bring back the colors to what they were supposed to look like.