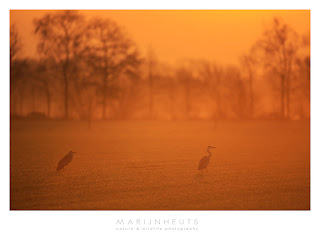 Before venturing into the Christmas holidays, I had really looked forward to some quality time with both the family and the camera. But because the dark days before Christmas decided to really live up to their name, the camera remained largely untouched. However, a new year means new dawns and new chances, so when some less medieval weather was predicted for January 2, I was happy to give the new year a try and was not disappointed at all. The predawn light had not much on offer, so I quickly left my playground, switched the wide-angle lens for the long lens and went for a drive elsewhere. The first subject I came across was a Roe Deer buck that swam across a stream, not something you get to witness everyday. Although the photographs are only so-so, it was a great encounter and a very promising start to a new year of photography.

Around the corner was my intended destination for the morning, a field that serves as an earth-worm take-away restaurant to about a dozen Great Egrets. It also happily provides to a number of Great Blue Herons and Common Buzzards. At first, the Egrets (which were my main target) stayed away way too far, but the Herons played along nicely when the sun rose above the distant tree-line. A thin layer of mist over the fields did the rest and so my first decent shot of the year was in the pocket. So much better than the dark and gloomy start (and end) to 2012. Later on, I also got some nice close shots of the Egrets, with the warm early morning sunlight coming over my shoulder. If this first new dawn is a precursor for a lot of fantastic light and great encounters in 2013, I’ll surely be there to photograph them. I wish you the same.