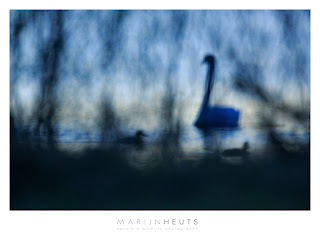 Various things to be done in and around the house this weekend but I managed to go out for a few hours on Friday morning. That’s the positive side of these damn early sunrises around this time of the year: being able to go out and be back home when it is still morning. I decided to try the new hide in the reeds. Not much was going on, the feeder was left untouched and because of the hard wind, the warblers were not eager to climb up and perform. All in all, it was a very peaceful and quiet morning, but photographically disappointing. The reedcutter had finished his job on the other side of the large pond and the forestry immediately raised the waterlevel afterwards…a lot. Luckily we placed the hide on poles, but filling the feeder still means wearing a wading suit. So much for waders, stilts and wild boar in front of the hide. Hopefully the warblers will find the food soon, I am confident they will. On the way to the hide in twilight, I tried shooting the resident swans and ducks through the reeds. I manually focussed behind the subjects and really like the resulting, painterly images a lot. To me, they perfectly convey the darkness and silence of the blue hour, when most people are still fast asleep and the birds are slowly starting the day.

On Sunday, I spent some time in the hide at the Little Owl nestbox. I first had to repair it because the hard wind of the day before made it collapse. Fortunately, the owls are of the confiding type and accept the hustle and bustle in their territory. They only showed around 8am, hunting from the fenceposts behind me for worms and grubs. They then both entered the nestbox, the male leaving after some 5 minutes. He continued the hunt and brought the female a very tasty (not!) looking Cockchafer larvae, which she accepted cheerfully, judging from the sounds that came from the nestbox. Things are looking good, it seems the female is brooding. Really looking forward to the coming weeks, their antics are just so funny to watch and photograph!