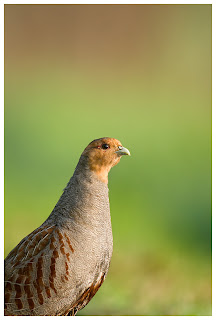 Inspite of being tired from a few very short nights of sleep, I managed to get out early on sunday. Last week, I spent a morning in a tenthide for the Stonechat couple. The bushes that they have built their nest in border a sandy farmroad. The adjacent farmland features patches of long grass and wildflowers. An ideal residence for Partridge, a bird on the Red List.

Three couples live in the area around the tenthide, but only one couple regularly visits the spot in front of the hide. Sunday was no exception, although I had preferred them to visit an hour earlier when the light was a bit softer and warmer and there was still a thin layer of fog in the air. Reason to go back and try for some different shots.

I think I’ll put a thin layer of plastic sheet in the tenthide, as it appeared the exact spot where I wanted to lie down was inhabited by not-so-friendly red ants. Both my hands and wrists were swollen for two days because of the large number of bites I received from the little buggers.