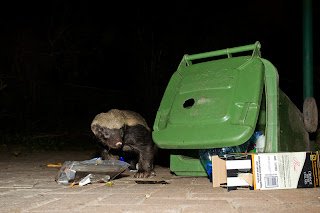 When checking in for our stay at Tamboti tented camp, the staff told us there was a resident Honey Badger (Mellivora capensis, Honingdas) who visited the tents at night. We should just ignore it and everything would be fine.On the one hand, I looked forward to meeting the badger. They are mainly nocturnal and therefore are rarely seen, so this was to be a great opportunity to spot one. On the other hand, the Honey Badger is notorious for being one of the most ferocious animals in Africa. I mean, they bite off the head of a snake for breakfast and are immune to their venom! The first night, when already asleep, we were awoken by a lot of noise and it got closer and closer! The next morning, we found our dustbin on its side (and all the other dustbins in camp, that’s why the noise came closer and closer).

Could have been the monkeys. The second evening, we were having diner on the small veranda when the Honey badger appeared. He ignored us, stood upright against the dustbin and turned it over. He threw the lid open (almost humanlike) and walked inside, took what was to his liking and only came out every now and then to check out if everything was safe. He returned several times that evening and night, much to our enjoyment. He did not seem to be bothered by our presence.

The third evening, I had the camera with a wide-angle lens and a wireless remote on a beanbag near the dustbin. As if on command, the Badger showed up and performed his act. He had a strong preference for pearbrine, not meat as we had expected. When he had turned over the dustbin, I had to change the composition so crawled behind the camera. I was 2 meters from Mr. Ferocious and he did not care at all! When I was back on the veranda, he took the stairs and came towards us. That was close enough and a small movement of my foot sent it back to the dustbin. He came back several times to see if something had been added to the pile of rubbish. An amazing experience and one of those surprises the bush has on offer!