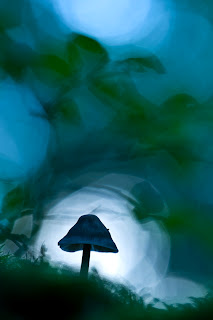 The winners for the 2012 Memorial Maria Luisa nature photo contest have been announced. I am very happy to be among the winners of this competition for the third time in a row. This year, two of my images have been awarded the highly commended status, while two other images made it into the finals but just fell short.

The Fungus image dates back to 2009, when I spent an autumn morning with members of our photoclub at a forest close to home. We did not find many fungi, but sometimes you only need one. This particular mycena grew among blackberry leaves. By taking a very low angle (lying flat in a ditch), I could create an out-of-focus frame with the blackberry leaves and include the blurred rings of light protruding the canopy high up above. I set the whitebalance to Tungsten in-camera to stress the bluish predawn colors I witnessed at the time.

The Roe Deer image was shot in February last year, during that one day of snow. I happened to come across a small herd that foraged at the edge of a forest. The normally very cluttered background was hidden by the snow and grey sky. A small aperture rendered a lot of snow flakes in focus, which turned the image into a rather abstract one.

All winning images can be found here.