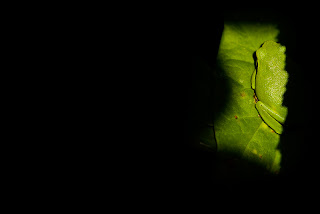 The idea was to go to my favourite location again and see what the sunrise would bring this time. Well, not a lot. The sky was cloudless and thus featureless, with only a small orange band above the treeline some 45 minutes before sunrise. The small amount of fog had gone before I could say ‘fog’ (at least it sounded like fog). On my way to the shoreline of the fen, I had noticed several Damselflies failing to hide under a cover of dewdrops. So Plan B was to see what possibilities they might offer. I found myself a Damselduo and slowly positioned the camera against the rising sun. Because I was out way too early, I first enjoyed a cup of coffee and another one, and waited for the sun to rise.

In the end, I got some nice sunrise photographs of the Damselduo against the reflection of the rising sun, which is less bright than the actual sun itself, and thus easier and less dangerous to photograph against. After a few minutes the sun was too high for the shots I was getting, and thus I decided to move on. I went to the local fishing ponds in search for sunbathing Tree Frogs. This species has been reintroduced in the area over the course of the last few years and because I photographed the release of the juvenile frogs, I knew exactly where to look. It did not take long before I found six Tree Frogs. As usual, they were either deep in or up the thorny Blackberry bushes they call their home, or happily showed me their froggy behinds. My ethical policy is never to touch or move Tree Frogs so I had to make do with what they offered me. When I tried to photograph a frog from above with the sun from over my shoulder, I noticed that my right hand was blocking the light. At first I thought that was very annoying, but soon I saw the potential of the situation. I repositioned the tripod such that the frog was half-covered by the shadow of a leaf, and used my left (gloved) hand to block the sun and create deep shade to the left of the frog. The result is a rather graphic representation of the scene.