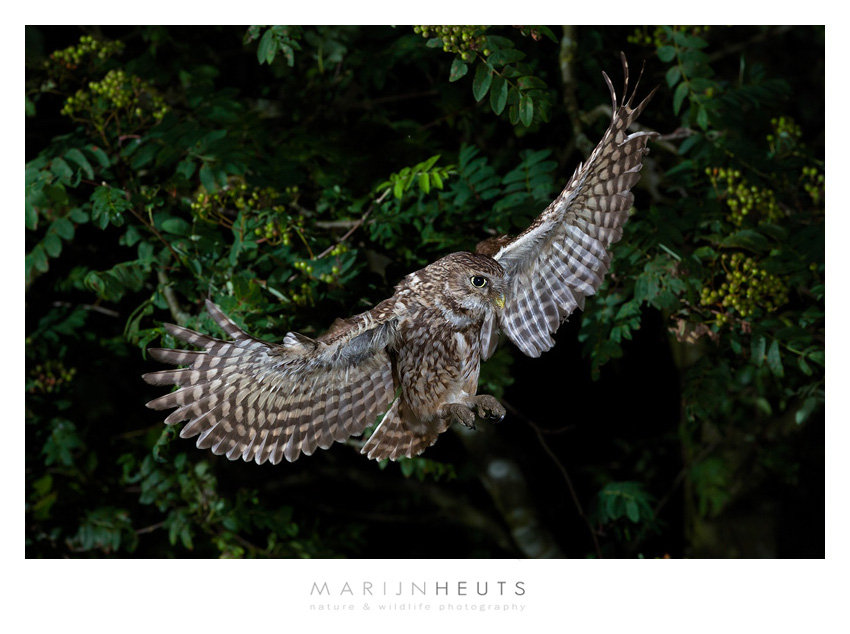 Normally around this time of the year, I would probably complain about those ungodly early wake-ups and the lack of decent sunrises. Not this time, as fate made me drastically change my schedule. The last week I have been photographing at hours when the light has already long gone to darker places. Why? Because of my concern with the wellbeing of the Little Owls, some time ago I placed an observation camera and provide a small daily dose of mealworms. I did not expect anything, as I have been feeding them since May and have never seen them take any free meals. When checking the camera however, I was surprised to learn that the female would visit the setup every evening at roughly the same time, a few minutes before or after 10.30 pm. She took the mealworms to the chicks one by one and returned four times per minute. The decease of the male has probably made the female grasp everything edible. Whatever the reason, this was too good an opportunity to not take.

So I made plans about flash setups. Which is easier said then done with little experience on the subject matter. After drawing some sketches of the setup, I tried to calculate the required camera distance, depth of field at the intended aperture, the effect the shooting angle had and the distance the owl could travel before being rendered out of focus. It was a trip down memory lane, all the way back to math at high school, calculating angles and triangle legs. It definitely took me way more time and help from Google than back then, but I got it. The results of the first evening showed that I had the math right, but the lens had to be pointed in a better direction. I had a lot of well lit and sharp keepers, but the owl ended up in the lower right corner every time. At least I had the light right, which was the part that had worried me most. I left the light stands in place and went back for a second try. Now I had aimed the lens a lot better. The image above is only a minor crop from the in-camera result.

Best part is that the return on investment is very high. I setup the flashes around 9.30 pm and go into the hide. The female shows at 10.15 pm, starts taking the mealworms around 10.30 pm and finishes the last one around 10.45 pm, about 60 shots later. At 11 pm, I’m back home. Not bad, is it? Not unimportantly, I did some research on the effect of flash on owls and could not find any evidence that it would be harmful. From what I saw, I can tell that the female is not bothered at all, she does not even blink an eye, pardon the pun. I carefully started with taking images every third landing in order not to overdo, but could quickly increase to every second landing and ended up pressing the shutter every landing.