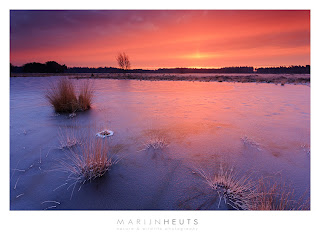 Land of Fire and Ice is a designation normally used to describe the rugged beauty of Iceland. But last Friday I only had to go a few kilometres from home to experience something very similar. When I walked the dog before heading out, the sky was very cloudy and I thought I had all the time in the world to drive to my playground. When I finally did, I cursed at myself for forgetting that I cannot see the horizon from where I live. Outside town, I immediately saw that a broad band above the horizon was clear from clouds and had already turned red. Now things looked promising, because that red would sooner or later hit the clouds. I rushed to my location of choice, being not the kindest of person to the suspension of my car. When I hit the brakes and quickly assembled my gear, the clouds had already started to take on a pink hue.

The ice on the fens was too thin to walk on and too thick to just wade through. I put on the wading suit and worked my way into the fen. Three kicks down, one step forward was my rhythm until I reached a good vantage point. Just in time to see how the clouds exploded with color. Pinks, oranges, reds and blues fought for frontrow seats and the landscape bathed in surreal colors. The heavy overnight winds had chastisted the upper layer of ice, making the surface very rough. The rising sun hit the upper parts of the ice, with the rest still in shade, making for thousands of little pink islands in a sea of blue. After only 5 minutes or so, the show was over when the sun got blocked for the remainder of the day. But sometimes 5 minutes is all it takes. I spent the rest of the morning on my intended little project and, against all odds, got my first results. More on that later.