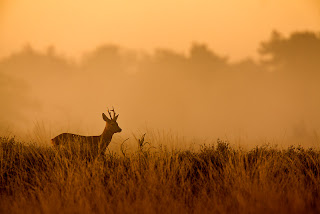 Another week has passed and still no decent visual observation of a fox (except for one crossing the road in front of the car long before dawn). I spent two very early and very long mornings at a den that looks promising, but the only thing I got during 11 hours of observation was a glimpse of something tiny trying to get out into the open, but returning into the den immediately. Hard to judge during a split-second, but it seems the cubs at this location are still very small. That might explain the lack of prey remnants and feces outside the den. I’ll go back this weekend and see what happens. Especially Thursday (Ascension Day) got me a bit frustrated, because a cold night yielded one of the most beautiful foggy mornings I ever saw.

For a short moment I was in doubt whether to go for the foxes or change into landscape mode. I decided to stick to the plan and head for the den. In hindsight of course a wrong choice. From underneath my camocloth, I saw a Roe Deer buck pass behind me in a semi-circle. I slowly turned around and envisaged a splendid image of the buck walking in front of the rising sun. But of course, as always during a spell of bad luck, the buck suddenly changed from walking into running mode just when he was about to walk in front of the sun. And slowed down again only a few meters further. So no buck in front of the rising sun, but at least I got to press the shutter button once over 11 hours of waiting.

Yesterday was the same cup of tea: I hoped for a nice sunrise over the local fens and headed out, got into the wading suit, into the fen, got bitten by millions of mosquitos, only to discover that the tripod was still at home. It usually never, ever leaves the car, but now it did because I needed the trunk space for something else during the weekend. Not too easily deterred, I got back into the car (after first getting out of the wading suit…) and went to look for Roe Deer in the fields. I found a couple and a treesome at different locations in nice light and nice settings. However…at the first location the Roe Deer were frightened by a passing car with a loudly shaking and clinking trailer, on it two metal hunting blinds. If I were a Roe Deer, I would have run for my life too. At the second location, two very loudly talking bicyclists sent the Roe Deer running very fast into dense forest cover. I must say I get used to the continuing disappointment, but still I would not mind it coming to a stop. The sooner, the better!