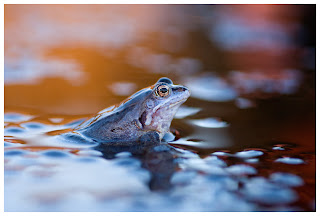 Just back from Iceland, I received a message that the Moor Frogs (Rana arvalis; Heikikker) had emerged from their winter dwellings and had started their annual activities: the males turn blue and make strange popping sounds to attract a female. As I had an enormous load of Iceland images to work through and the camera gear needed some serious cleaning, I decided to pass on the opportunity for this year.

Although I do see images of blue Moor Frogs pop up on the internet, it appears the height of the ‘season’ has already come to an end. When it happens, be quick as the spectacle only lasts for so long (usually a few days)!

Here’s an image from two years ago, when I found myself in between a lot of blue males on a beautiful and sunny afternoon in March. Now it’s time to think of subjects for the weeks to come. I do have some plans, but it all depends on whether the subjects are actually present and willing to cooperate. Stay tuned.