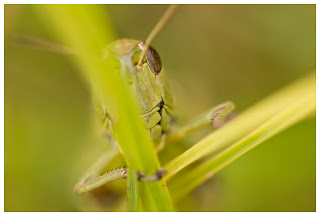 Finally a chance to give the indexfinger some relief.

A friend took me to several small patches of wet grassland close to home, carefully managed by a nature conservancy organisation. These meadows don’t look like much to the untrained eye, but all kinds of insects surely know how to appreciate this habitat. It was just teeming with miniscule wildlife, I could easily spend a whole day on just a square meter. Especially the sheer number of grasshoppers was amazing. Every step I took caused at least a dozen of them to jump around.

So I focused on the various species of grasshopper that inhabited the grassland. My plan was to shoot them clinging to a stem of grass, but from above and at large magnification. That way, I would get a close portrait with both the foreground and background nicely out of focus. A good plan theoretically, but the execution was a different thing. These critters are called ‘hoppers’ for a reason…a very good reason. They hardly ever sit still (when they do, they like to play hide-and-seek behind the stem of grass), and particularly dislike a tripod being placed right over them. Shooting handheld was not an option, because of the large magnification (and thus very limited DOF) I wanted to achieve. After a few hours of fun and frustration (so that’s why they call a group of grasshoppers a plague), I had bagged a few photographs I am happy with.