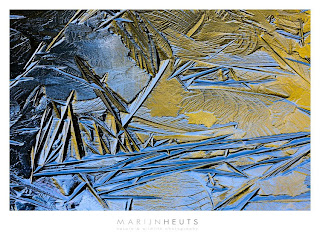 King Winter has finally returned from his pensionado winterbreak and gone are the luke-warm temperatures, grey skies and daily liters of rain that we had to deal with for so long. Temperatures have dropped below zero and the air is crisp. Time to put on warm clothes and venture outside. And so I did. I really wanted to photograph ‘my’ playground in winter conditions again, but somehow miserably failed. On two consecutive mornings, I just did not get the right feel for the landscape. True, the predawn skies were far from impressive and colorful, but the thin layer of ice and the hoar-frost covered heather still deserved more of a photographic tribute than I had on offer. When my Wellingtons were filled to the brim with icecold water from too much careless (and restless) treading through the fens, I accepted my defeat and went to seek refuge elsewhere.

The idea was to check on a hidden mudpool in the forest that is frequently visited by Deer, Boar and Fox. I have never seen any of them at the pool, but their tracks are everywhere. I did not find any animals, but the ice on the pool immediately attracted my attention. Because of a stiff wind (and probably the movement of bathing and drinking animals), the ice had taken on all kinds of interesting shapes and forms. To top it off, the pool itself was in deep shade, but the highest trees that circumvent the pool were hit by the morning sun and the warm color reflected on a few spots on the ice. The ice was too thin to step on, so I had to shoot with a long lens from the shore, which called for use of a very small aperture to get front to back sharpness. This truly is nature’s art, what painter could think of (and execute) such colors, shapes and forms?